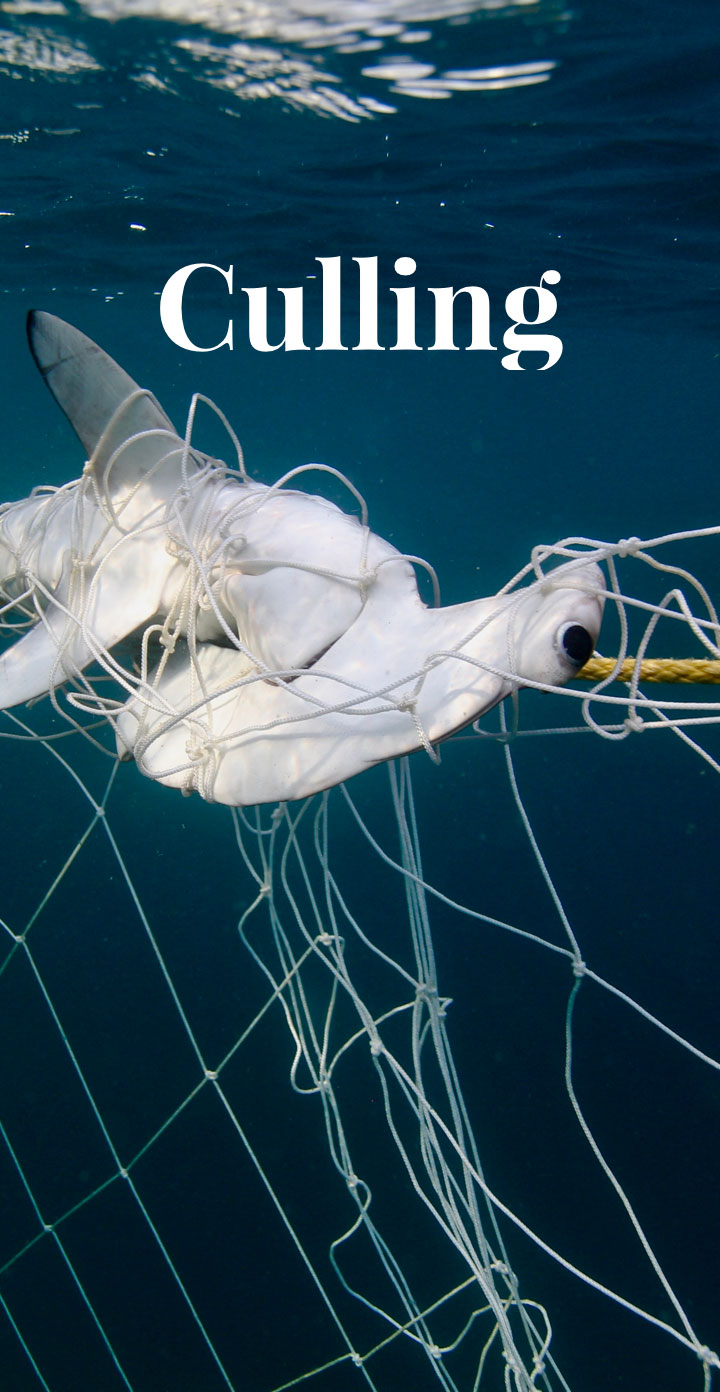 Australia is one of the only countries in the world to actively kill sharks in the name of bather protection. Culling programs are not only ineffective at protecting ocean users, but they come at a huge cost to sharks and other marine life.

There are shark nets installed at 51 beaches in New South Wales and 23 beaches in Queensland. These nets are the most indiscriminate of all shark control measures, catching everything from Hammerhead Sharks to Humpback Whales.

Every year hundreds of animals are killed in shark nets and drumlines in Australia. These deaths include threatened, vulnerable and endangered marine life that our governments are legally responsible for protecting.

Queensland’s Administrative Appeals Tribunal found that culling of sharks has a negative impact on the health of the Great Barrier Reef and that killing these animals makes no difference to human safety.

It ordered the end of the lethal component of Queensland Shark Control Program. The Queensland Government has appealed this decision and a hearing will take place later in 2019.

Due to the appeal, lethal drumlines are still in operation in our World Heritage listed Great Barrier Reef and throughout Queensland. Drumlines use baited hooks to catch and drown sharks. Many sharks are also shot dead on these drumlines if found alive.

New South Wales also continues a lethal shark control program through the use of shark nets, causing suffering and death of many marine animals.

Academic research shows shark nets are ineffective, and human-shark interactions can still take place at beaches with nets and drumlines in Australia.

We can keep people safe in the ocean without culling sharks, by embracing non-lethal technologies like drone surveillance and personal shark deterrents.

Both NSW and Western Australia are trialling the use of SMART drumlines to reduce the lethal take of sharks, but concerns still remain over the stress and injury caused by capture. Both states are also using non-lethal technology as part of shark bite mitigation strategies, however Queensland lags far behind.

Shark bites are extremely rare. In Australia in 2017, you were 5 times more likely to die from lightning than from a shark bite.

*Numbers do not yet include sharks killed outside the Great Barrier Reef in QLD in 2018 or sharks killed in NSW in the second half of 2018.

This is the number of other marine animals killed in shark nets or on drumlines in Australia since 2017. This includes 27 turtles, 26 dolphins and 193 rays.

There is a wide range of effective, non-lethal technology available to governments to protect both ocean users and our marine life.

Learn more about the issues facing sharks in Australia and how you can help become a conservation champion for their protection.