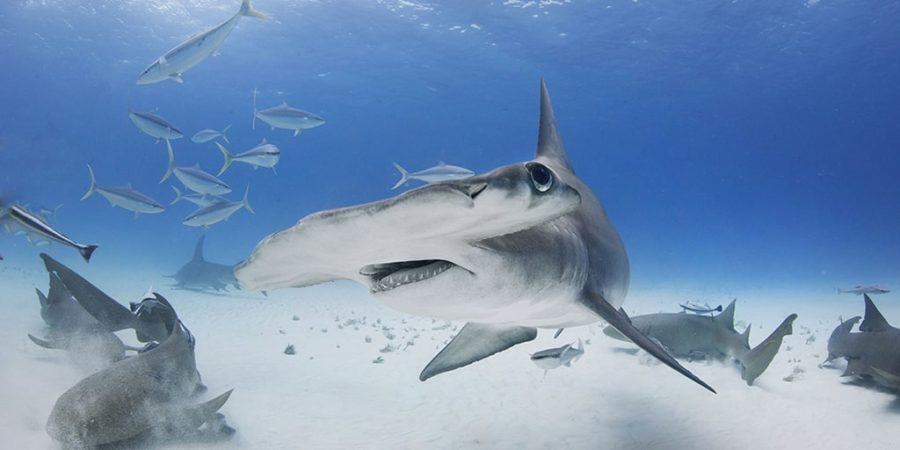 To say mankind’s relationship with sharks is complicated, is a massive understatement. Maligned for centuries as mindless killing machines, it’s only been very recently in the history of the human race that we’ve come to realise that not only this is not at all the case, but we’ve been beginning to learn that sharks are vitally important to ocean ecosystems.

But why are sharks important to the ecosystem, and why is shark conservation important?

As most of us all know, large sharks like great white and tiger sharks are at the top of ocean food chains. They are what we call “apex” predators, and being the ones at the top means they keep all of the other levels below them in balance.

Smaller sharks predominantly fulfill roles in the food chain that makes biologists call them “meso-predators.” They occupy lower rungs of the food chain, but nevertheless exert important pressure on populations of fish, squid, crabs and other marine invertebrates, not allowing any one group to grow too abundant and thus upsetting the delicate balance.

Their ability as predators to maintain this balance amongst the animal members of marine communities means that sharks are absolutely essential for the health and balance of marine ecosystems, and also biodiversity.

Biodiversity is important to ecosystems because the higher biodiversity an ecosystem has, the more resilient that ecosystem is to change. Just think about it, if there’s more species in an environment, with all kinds of different tolerances to temperature, light, salinity, resistances to a disease or any number of things, changes in that environment will impact some species but not all of them. If a system has low biodiversity, say only one or two different species, a change in temperature or a new disease could cause the whole system to collapse. If a system has many species, then a change in temperature or a new disease is likely to affect only some of the species, not all.

Ecosystems experience change all of the time. These days we see ocean temperatures increasing, new weather patterns and changes in the communities of marine animals due to commercial fishing. Observing the impacts of these changes, have shown the ecosystems with greater biodiversity have been much more resilient to collapse than those ecosystems with low biodiversity. The ability to survive in the face of change is why biodiversity is important to an ecosystem.

Why are sharks important to ecosystems?

As scientists are truly beginning to understand how important sharks are to biodiversity and ocean ecosystems, we are sadly also seeing the decline of shark populations around the world.

Shark and ray populations are estimated to have declined by an astonishing 71% since 1970[1]. Additionally, fisheries scientists have suggested that only 1 in every 10 large fish remain in the ocean[2]. This decline in shark populations is the result of half a century of industrial and commercial fishing. This decline means 167 species of shark are endangered[3].

So while we are marvelling at the ways in which sharks are important to the ecosystem, the truth of the matter is that these vitally important sharks are actually endangered, spurring the worldwide effort to advocate for shark conservation and shark protection.

The largest threat to species of sharks, and the biggest reason why sharks are endangered, is commercial fishing. Fishing fleets around the world catch an absolutely astounding 60-200 million sharks each year[4]. While most of these are caught for use in the shark-fin trade, there is also an increasing demand for their flesh as well as their oil-rich livers. Often, sharks are caught by fishing vessels attempting to catch other fish, such as tuna. In these instances, sharks are what we call “bycatch”.

What’s being done to protect sharks?

It’s because of this drastic decline, and the realisation that sharks are important to biodiversity and ecosystems, that shark advocacy around the world has begun in earnest. Shark protection and shark conservation requires the cooperation of governments, industry and fishing management organisations. These kinds of negotiations and management are often difficult, and there are rarely any voices to speak for the sharks. Fortunately, organisations such as Humane Society International and the Australian Marine Conservation Society among many others around the world infiltrate these processes to provide a voice for sharks, the ocean, and the natural world.

Funding for the efforts of non-profit organisations working for shark conservation is often raised through “adopt-a-shark,” “sponsor-a-shark,” or any number of requests to donate to save sharks. Any of these adopting, sponsoring, or donating to save sharks can be potentially helpful, but the best way to help sharks is by reaching out to our elected officials to vocally advocate for shark conservation, and making sustainable choices when it comes to our seafood.

By signing up to be a Shark Champion, you will be kept up to date on all the shark conservation work we are engaged in. In the courts, in the media, or in the halls of Parliament, whether it’s fisheries, threatened species protections or the shark culling programs on Australia’s East Coast – if it can help Australia’s sharks and rays, we’re on to it.

We would be very pleased to count you as a Shark Champion, to give a voice to these crucially important animals.

Reading Time: < 1 minute We are thrilled to offer live screenings of Envoy: Shark Cull around Australia! The ground-breaking…

We hope you've enjoyed the shark information provided. If you'd like to support our cause, and shark conservation, please become a Shark Champion by signing one of our petitions or donating financially.